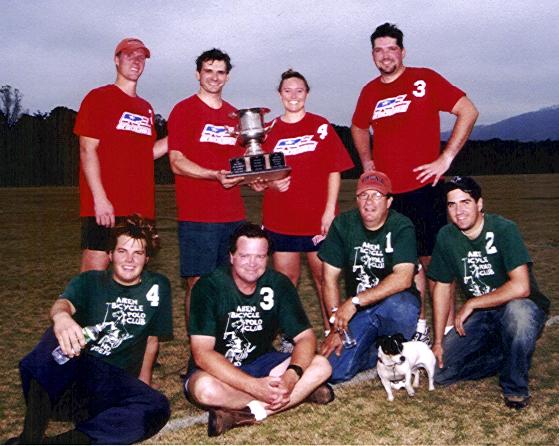 The upstart Unionville Bicycle Polo Club of Pennsylvania traveled to Charlottesville, Va. and came away with an 8-7 victory in the final of the 2003 Jan E. Wendland Memorial. Three teams were present for the event, with Aiken having defeated the U.Va. alumni team in the semi-final game. (The score of that game and the identities of the U.Va. team members are being withheld, since some do not want their names coming up in Google searches.)

Unionville, with Nancy Davidson at #1, Eric Zandotti at #2, Crosby Wood at #3, and K.C. Kulp at Back, tried a bit of gamesmanship by wearing numbers that did not correspond with their positions (see picture), but the wily veterans of the Aiken team were not easily fooled. In the end, it was the superior play of the Pennsylvania foursome that carried the day, as Aiken tried several different lineups to counteract their opponents' tactics. Unionville had a strong first half, building a 5-1 lead before Aiken scored their second goal just before half-time. Aiken tried to come back in the second half, but could only get within one goal with less than 30 seconds remaining, and time ran out on them.

For Unionville, Nancy Davidson played a solid #1, holding her position and forcing the Aiken players to chase her down on repeated breakaways. Eric Zandotti, who organized the club in June of this year, played an aggressive #2, showing great speed and harassing Aiken's #3, Bill Matheson, throughout most of the game. Crosby Wood, who had played a good bit of equestrian polo as a teenager, seemed to be everywhere, beating Aiken's forwards to the ball and sending accurate passes to Davidson and Zandotti. K.C. Kulp was equally impressive at Back, allowing Aiken only one breakaway and seemingly never missing the ball.

The progress of the Unionville players has been remarkable, since Aiken had beaten them soundly in September on Unionville's home field. They have developed a keen rivalry with the Mt. Washington club in Baltimore, and hope to do likewise with the newly formed Charlottesville club. Having defeated a team that included three members of the previous year's winning squad, Unionville's players are looking forward to defending their title next year.