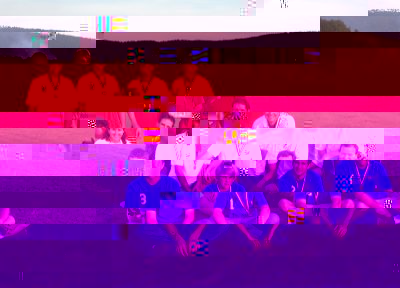 The home team came out on top in the 2004 Jan E. Wendland Memorial tournament, played September 25 at the University of Virginia Polo Center in Charlottesville, Virginia. They combined a brilliant training regimen of not practicing at all between July 3 and the day of the tournament with a clever strategy of having half their team show up late, so the Unionville and Aiken teams would wear each other out in the first match. The Aiken team also prepared for the event in a unique fashion, driving until 2:30 in the morning the night before the event and compounding their lack of sleep with a lack of nourishment by skipping lunch.
Unionville grabbed the early lead in their match against Aiken and never looked back. They led 4-1 at the end of the first chukker, 6-2 at the half, and 10-2 after three chukkers. The final score was 11-5, with KC Kulp leading Unionville with four goals, Eric Zandotti and Crosby Wood each adding three, and Liz Beer contributing one.
Aiken, having taken a beating from Unionville, had to then face Charlottesville, and fared no better. Charlottesville grabbed a 2-0 lead in the first chukker, and maintained their 2-goal advantage at the half, 3-1. They scored two more goals in the third chukker to lead 5-1 before Bill Matheson cramped up and Aiken forfeited the game. Unionville's Eric Zandotti gave Matheson some grief about being a quitter, which would soon prove ironic.
Charlottesville got off to a fast start against Unionville as well, grabbing a 2-0 lead in the first chukker on goals by Scott Gray and LJ Lopez. Crosby Wood scored a pair for Unionville in the second period, but Lopez's second of the day gave C'Ville a 3-2 lead at the half. The teams traded goals in the third chukker, with Gray and Lou Lopez each scoring once for C'Ville and Wood adding two more for U'Ville, making the score 5-4. Wood scored again in the fourth to tie the score, but Zandotti's thigh cramped up, leaving him screaming in pain and forcing Unionville to forfeit, just as Aiken had.
The field in Charlottesville was in fantastic condition, and the games were played at a brisk pace, which probably helps explain the cramping problems.

Back to ABPAA Tournament Page