ABPA, BPAA JOIN FORCES ON AND OFF THE FIELD 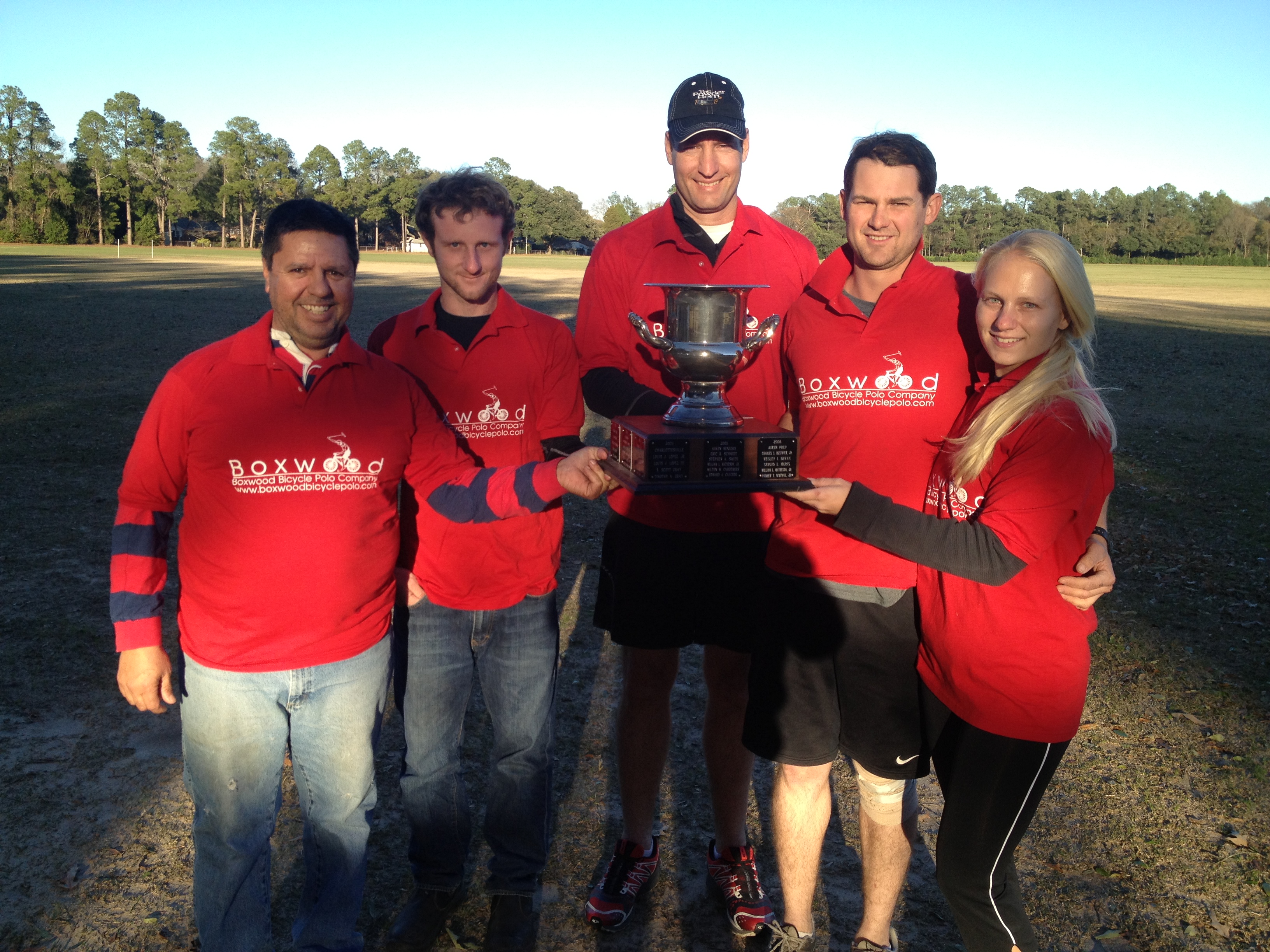 The Cowboys, winners of the 2012 Jan E. Wendland Memorial: George Galvan, Zak Smith, Will Traver, Will Tankard, and Samira Waernlund

Welcome to the American Bicycle Polo Association of America

What do you get when you combine the low-impact aerobic workout of cycling, the challenge of a racket sport, and the camaraderie of a team sport? Bicycle Polo!

Polo is thought to be the oldest team sport known to man, dating from the days when Persian warriors first rode horses into battle. Bicycle polo evolved a bit later, having had to wait for some clever chap to invent the modern bicycle. Polo has long been known as "the king of games," but the money and skills required have greatly limited its popularity. Bicycle polo has a much broader appeal, since almost anyone can ride a bike, not to mention afford one. Anyone, male or female, aged nine to ninety, can play bicycle polo!

Bicycle polo combines three key elements: cycling, racket sports, and team play. Most active people currently enjoy at least one of those by itself (e.g. mountain biking, tennis, or basketball); imagine how much fun it is to unite all three!

The picture above was taken at the 2001 World Bicycle Polo Championships in London. It shows the French Captain, Jean-Mickaël Languille, doing a wheelie while defending against the Canadian #1, Harvey Barton. (Unlike the clearly posed wheelie picture on a certain other website, this one was taken during actual competition.)

Bicycle Polo: More Fun Than You've Ever Had on a Bike

Cycling is one of the best forms of aerobic exercise known: it is low-impact, and involves very little risk of injury if you can avoid crashing. The only sure way to do so, however, is to ride a stationary bike, and that's not much fun. Riding on the road is nice and scenic, but most roads were not designed for cyclists, and many motorists resent sharing "their" territory. Then there are the dogs, who seem to like nothing better than chasing cyclists.

Mountain biking is also great fun, and the risks involved are part of the thrill. Even so, finding a good place to ride is not always easy, and often involves taking your bike a fair distance into the hinterlands.

Bicycle polo can be played on any soccer or football field, or even a lacrosse or field hockey field, if you happen to have one nearby. The level grass surface requires only one gear ratio, and it is a lot more forgiving than pavement or rocks if you fall. You can spend almost unlimited hours riding in a relatively small area, since the thrill of the game makes it almost impossible to get bored.

Bicycle Polo as a Racket Sport

Racket sports are extremely popular, primarily because of the challenge of the hand-eye coordination involved. The most popular by far are tennis and golf; the former gives you a good workout only if you are really good at it, and the latter only if you don't use a cart.

Tennis involves a lot of stopping, starting, twisting, and turning, all of which can be tough on your legs, especially on a hard court. In contrast, bicycle polo incorporates the smooth motion of pedaling. You have to play golf for hours just to hit the ball eighty or ninety times; you can get that much action in a half-hour of bike polo.