France came to Bill Matheson's 50th Birthday Tournament with a new lineup and left with the gold medals, beating the host Aiken A team 7-4 in the decisive game. Six teams competed in the event, with two-time Gold Medalists Canada providing additional international prestige. A team from Unionville, Pennsylvania made the 12-hour drive to Aiken to join in the fun, and a sixth team was put together with players from Aiken, France, Colorado, and Washington State.
The tournament was played in a league format, with each team playing one game against each of the other five. The schedule was arranged so that the French team would play the best U.S. team in the final game on Sunday at 3:30, with the opponent to be determined based on the result of Saturday's Unionville-Aiken A match.
Play began Friday, November 18 with what would be the most one-sided game in the tournament in terms of margin of victory, with France defeating Aiken B 16-2. Stephane Paris was the leading scorer for France with five goals, with John Pelourdeau adding four, Stephane Malandain and Julien Lasserre three apiece, and Jean-Pierre Malandain one. Mit Carothers and George Galvan each scored one for Aiken B. France led 3-0 after one chukker, 6-1 at the half, and 13-1 going into the final chukker.
The next game was a great deal closer, with Unionville winning their first-ever international match 7-5 over Canada. Craig Danks led the way for Unionville with three goals, while Matt Terrell and Crosby Wood each added two. Harvey Barton was high scorer for Canada with two goals, and teammates Mike Boyd, Peter Furmedge, and Asoka Mendis scored one apiece. Unionville led 3-1 after one chukker, 4-3 at the half, and 6-3 after three.

Unionville's Craig Danks scores one of his three goals against Canada.

The final game of the day, which involved all of the players who had just gotten out of school at 3:00, saw Aiken A defeat the International All-Stars. The All-Stars were hampered by an understandable lack of familiarity with each other as well as some bad luck shooting at goal, and came out on the short end of a 10-1 score. Seth Kopald led Aiken A with four goals, while Bill Matheson, Steve Smith, and Zak Smith each added two. Carl Baker scored the lone goal for the Internationals.
Saturday's action began bright and early at 8:00 with some unexpected frost covering the field, as the temperature had dipped to 32 degrees Fahrenheit (0 Celsius) overnight. France notched their second victory by a 10-2 margin over the International All-Stars, leading 4-0 after one chukker, 7-0 at the half, and 10-1 after three. Stephane Malandain led the way with five goals, while Stephane Paris and Jean-Michael Languille added two apiece and Jean-Pierre Malandain tallied one. Baker again accounted for all the scoring for the Internationals.
Unionville then notched their second win 12-2 over Aiken B, leading 3-2 after one chukker, 6-2 at the half, and 10-2 after three. Crosby Wood scored seven goals, Matt Terrell four, and Craig Danks one. George Galvan and Cuko Escapite each tallied one for Aiken B.
Aiken A continued their good fortune against Canada, garnering a 9-4 victory as Canada failed to capitalize on some early opportunities and trailed 2-0 after one, 4-1 at the half, and 7-2 after three chukkers. Seth Kopald and Bill Matheson led Aiken A with three goals apiece, while Taylor Freeman, Steve Smith, and Zak Smith each added one. Peter Furmedge tallied two for Canada, with Harvey Barton and Asoka Mendis contributing one apiece. 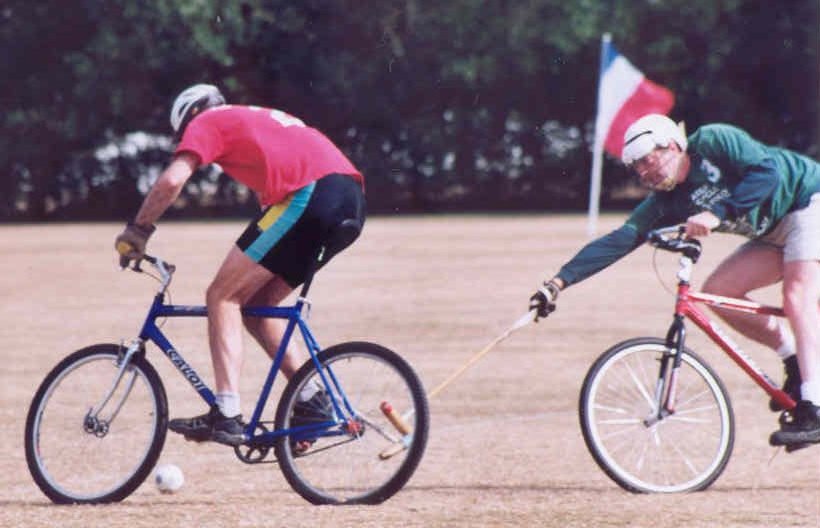 In Saturday afternoon's action, the International All-Stars got into the win column with a 12-6 victory over Aiken B. Baker again led the way for the Internationals with four goals, but this time he had considerable help, with Dennis Mullen adding three, Arthur Giraud and Ben Wyszynski two apiece, and Alain Derly one. Mit Carothers was high man for Aiken B with four, while Andy O'Byrne and Eric Schmidt each added one.
The 2:00 game would determine which U.S. team would face France in the final game on Sunday, as Unionville faced Aiken A. As the two best clubs on the East Coast, Aiken and Unionville have developed quite a rivalry, with the result of any particular match turning on whether one team or the other could bring their best lineup to the field. The Aiken A starting lineup of Zak Smith, Steve Smith, Bill Matheson, and Seth Kopald had never lost to Unionville (or anyone else, for that matter), but Unionville had probably brought their best team ever with Craig Danks, Matt Terrell, Crosby Wood, and Eric Zandotti. Other interesting factors were in play, as Aiken A had played a tough match with Canada that morning, while Unionville had a relatively easy time with Aiken B. Aiken A got off to a good start, leading 4-1 adfter the first chukker and 5-2 at the half. Unionville closed to within 6-4 by the end of the third chukker, and when Steve Smith started to cramp up, the outlook for Aiken A was not too good. Taylor Freeman took Smith's place and scored a key insurance goal to secure an 8-5 victory for Aiken A. Seth Kopald, Bill Matheson, and Steve Smith each had a pair of goals for Aiken A, with Zak Smith and Freeman each adding one. Terrell and Wood each had two for Unionville, while Eric Zandotti contributed one. 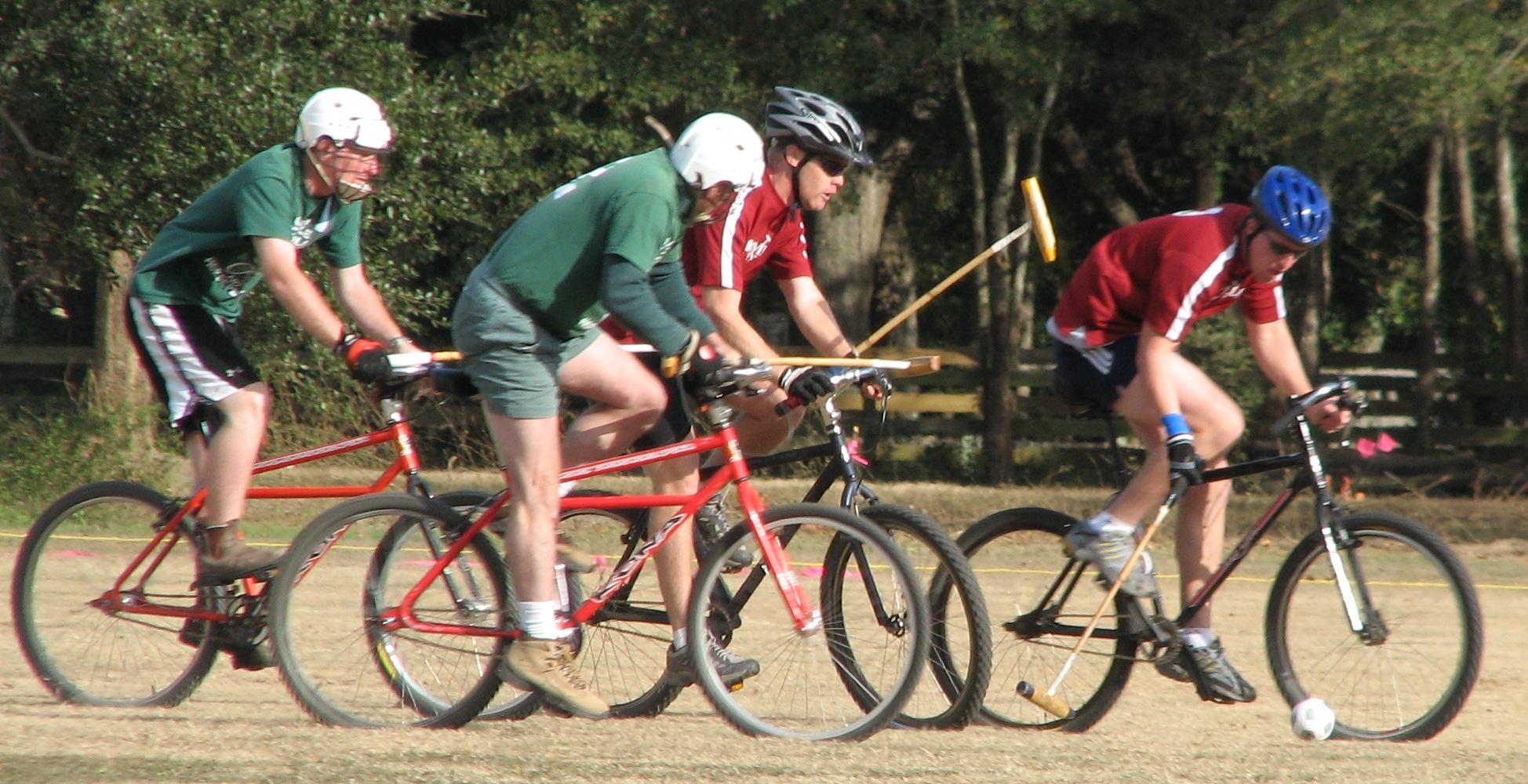 The 3:30 game between Canada and France was a rematch of the final game of the 2005 Bobigny International Open on September 23, but both teams had significantly different lineups: France added Stephane Paris and Julien Lasserre, while Canada lost Geoff Nielsen and Bill Matheson (who was playing with Aiken A). This time around, France came away with a convincing 9-2 victory, with Stephane Malandain leading the way with five goals. Jean-Michael Languille added two for the winners, with Stephane Paris and Jean-Pierre Malandain each adding one. Peter Furmedge and Asoka Mendis tallied one apiece for Canada. 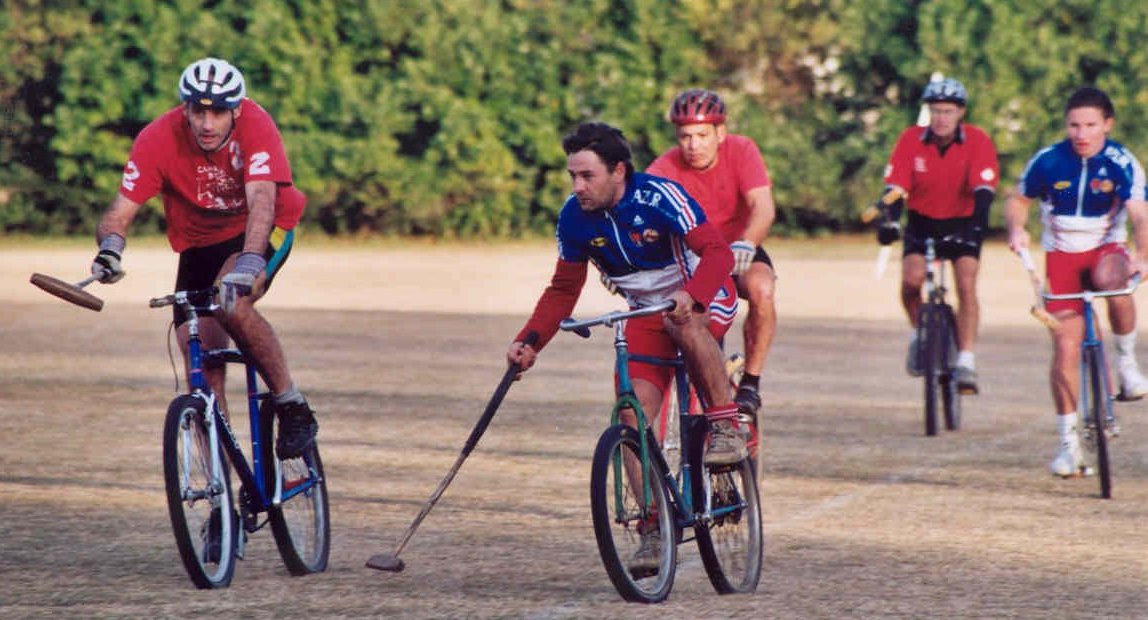 Canada's Peter Furmedge and France's Stephane Paris race for the ball in a bowl-in.

Sunday dawned considerably warmer than the previous day, with a temperature of 50 degrees Fahrenheit (10 Celsius), as Canada rebounded from their loss to France with a 13-4 victory over the International All-Stars. Asoka Mendis showed that he is a morning person with seven goals, enough to make him Canada's high scorer for the tournament, while Mike Boyd and Peter Furmedge added two apiece and Harvey Barton contributed one. Carl Baker led the way for the Internationals, as he did in every game, by scoring two goals; Arthur Giraud and Ben Wyszynski each added one.
The morning's second game pitted the two Aiken teams against each other, and Aiken B surprised everyone by taking a 3-2 lead in the second chukker before Aiken A tied it up just before the half. Aiken A took control in the third chukker to lead 8-4 going into the fourth, and came away with an 11-4 victory. Taylor Freeman led Aiken A with four goals, with Seth Kopald and Daniel Moski adding three apiece and Zak Smith one. Eric Schmidt led Aiken B with two, with George Bush and Mit Carothers each tallying one. Bill Matheson and Steve Smith sat out the game for Aiken A, hoping to remain fresher for their match with France that afternoon.
The last match of the morning would be France's toughest of the tournament, as Unionville actually led 5-4 in the fourth chukker before falling 7-5. The first half was a defensive struggle, with France leading 1-0 after one chukker and 2-1 at the half. France opened up a 4-1 lead early in the third, but Unionville closed the gap to 3-4 before the end of the chukker. France put Jean-Pierre Malandain in the game for the fourth chukker, but Unionville scored the first two goals to take their first lead of the day before France answered with three straight to pull out the victory. 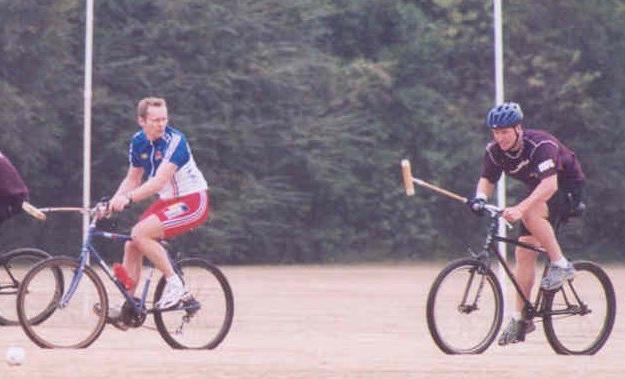 Afternoon play began with Canada taking a 9-1 win over Aiken B, leading 2-0 after one chukker, 4-1 at the half, and 8-1 after three. Harvey Barton proved to be an afternoon person, leading the way with five goals, while Peter Furmedge added three and Asoka Mendis one. Andy O'Byrne scored for Aiken B.
Unionville forfeited their game against the International All-Stars in order to get an early start on the 12-hour drive back to Pennsylvania, thus handing the bronze medals to Canada and depriving Crosby Wood of the chance to be the tournament's leading scorer (he would finish tied with Stephane Malandain with 15 goals). For their first international competition, they had given a great showing.
The final game between Aiken A and France started much like the France-Unionville game that morning, with very few goals: neither team scored in the first chukker, and France led 2-1 at the half. The scoring pace picked up in the third chukker, as France took leads of 4-1 and 5-2 before Aiken narrowed the gap to 4-5 going into the final chukker. Aiken had several good chances to tie the score in the fourth, but France got insurance goals from Stephane Paris and Julien Lasserre to win 7-4. Paris led all scorers with three goals, with Lasserre and Stephane Malandain each adding two for the winners; Steve Smith led Aiken A with two of his own, while Bill Matheson and Zak Smith added one apiece. 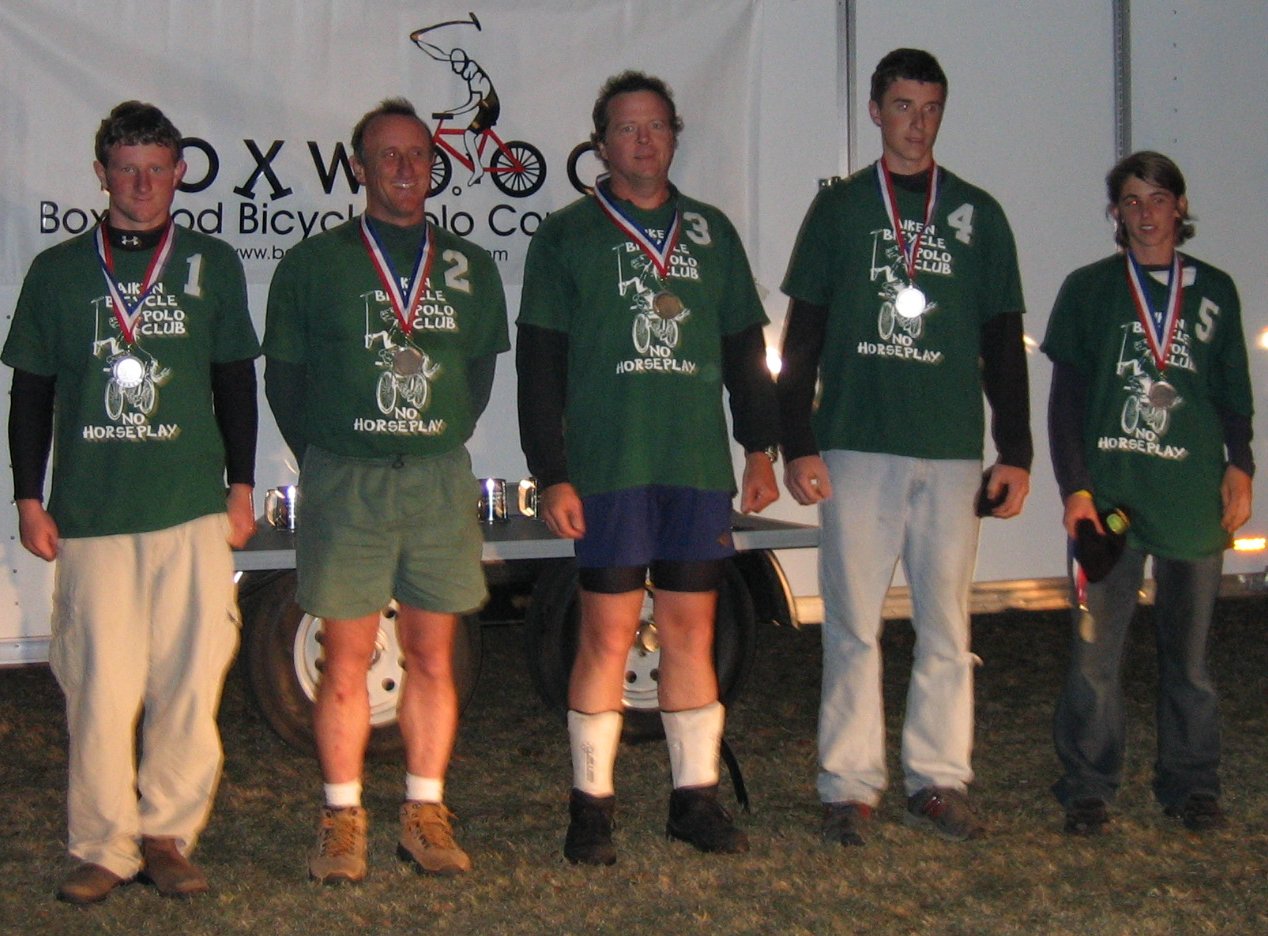 
Back to Tournament Results

Back to ABPAA Home Page